Case Study: What Does an Inbound Marketing Campaign Look Like?

The theoretical benefits of inbound marketing are well established. An approach based on value, built on an in-depth understanding of your audience and market needs, will naturally drive more leads and customers than a simple push of promotional messages your audience may never care about. 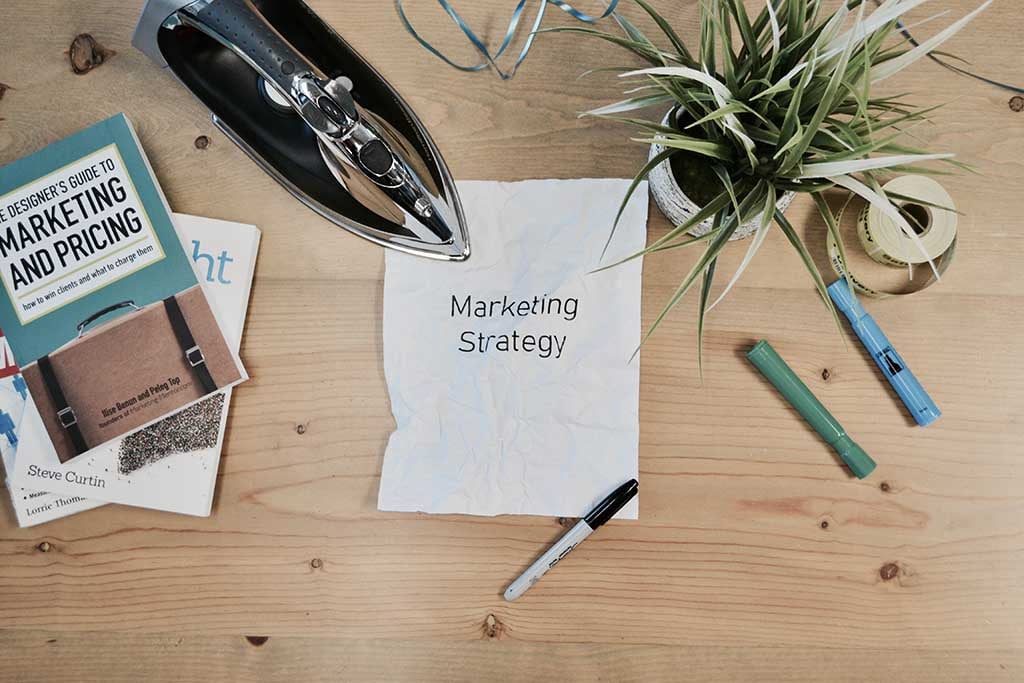 Theoretical benefits, though, will only get you so far. It's difficult to take all those articles related to best practices and statistics at face value when you don't know how to leverage that information into actual marketing and sales reports. Making that connection, in fact, might just be the most important step you can take as a business focused on inbound marketing.

Fortunately, there's content available to help you build that bridge between theory and practice. HubSpot recently published a webinar in which one of its own internal experts, David Murray, explained the exact process of building an inbound marketing campaign from ideation all the way to post-implementation evaluation.

Pre-Campaign: It Starts With Personas

Any campaign has to start with your audience, which is at its most effective when building buyer personas. Through these personas, you can better understand the unmet needs of your potential leads and customers, which will provide crucial information for all campaign stages below.

The target audience for this campaign was potential agency partners who could benefit from better ways to promote their services.

To that end, Murray and his team started by answering 5 questions:

The answers to these questions can drive each of the campaign stages below, as the HubSpot example covered throughout this case study will show.

Stage 1: Ideation as the Building Block of Your Marketing Campaign

It starts with finding the right topic. In the ideation stage of an inbound campaign, marketers should identify the unmet need to focus on, as well as ways they can solve that need in both messaging and format. This early stage also includes a discussion of the campaign scope in terms of geographic reach, the goals and KPIs to be accomplished, and internal agreement on all of these factors.

Murray knew that one of the core challenges for most marketing agencies consists of selling their services, and that the type of content they look for (based on both industry research and performance of past campaigns) tends to be original and recent research. As a result, HubSpot surveyed 1,400 marketing agencies to uncover the biggest sales challenges they tend to face on an everyday basis.

The results of this research drove the basis of the campaign. The HubSpot team decided on three building blocks that would become the lead magnets, aiming to drive new content:

The report would be translated into 5 languages, focusing on local data for these areas in each iteration and building a more segmented approach as a result. Every other piece of the campaign would be built around these core building blocks in both timing and gravity.

Stage 2: Planning the Campaign to Maximise its Value

With the ideation complete, the second stage of a marketing campaign goes to building the plan. It begins with an outline of tactics to be used, based directly on the persona research and answers to the related questions above. The next part is a timeline, building backwards from the end of the campaign to plan out each major building block and the tactics driving towards that lead magnet. Deadlines for the asset build (if needed) would have to be part of that timeline.

The HubSpot campaign featured an intensive amount of planning specifically designed for a smooth launch and execution. Tactics were mapped out by month to start, including email and social media as well as the landing page and asset build. The webinar would be launched three days before the report, with the round table following up about three weeks later for a more in-depth discussion.

The creation of all assets (from graphics to emails and, of course, the report itself) had to be built backwards from the three target dates. A simple spreadsheet enabled Murray and his team to keep track of that progress, ensuring a smooth timeline that would help, not hinder the ultimate product. 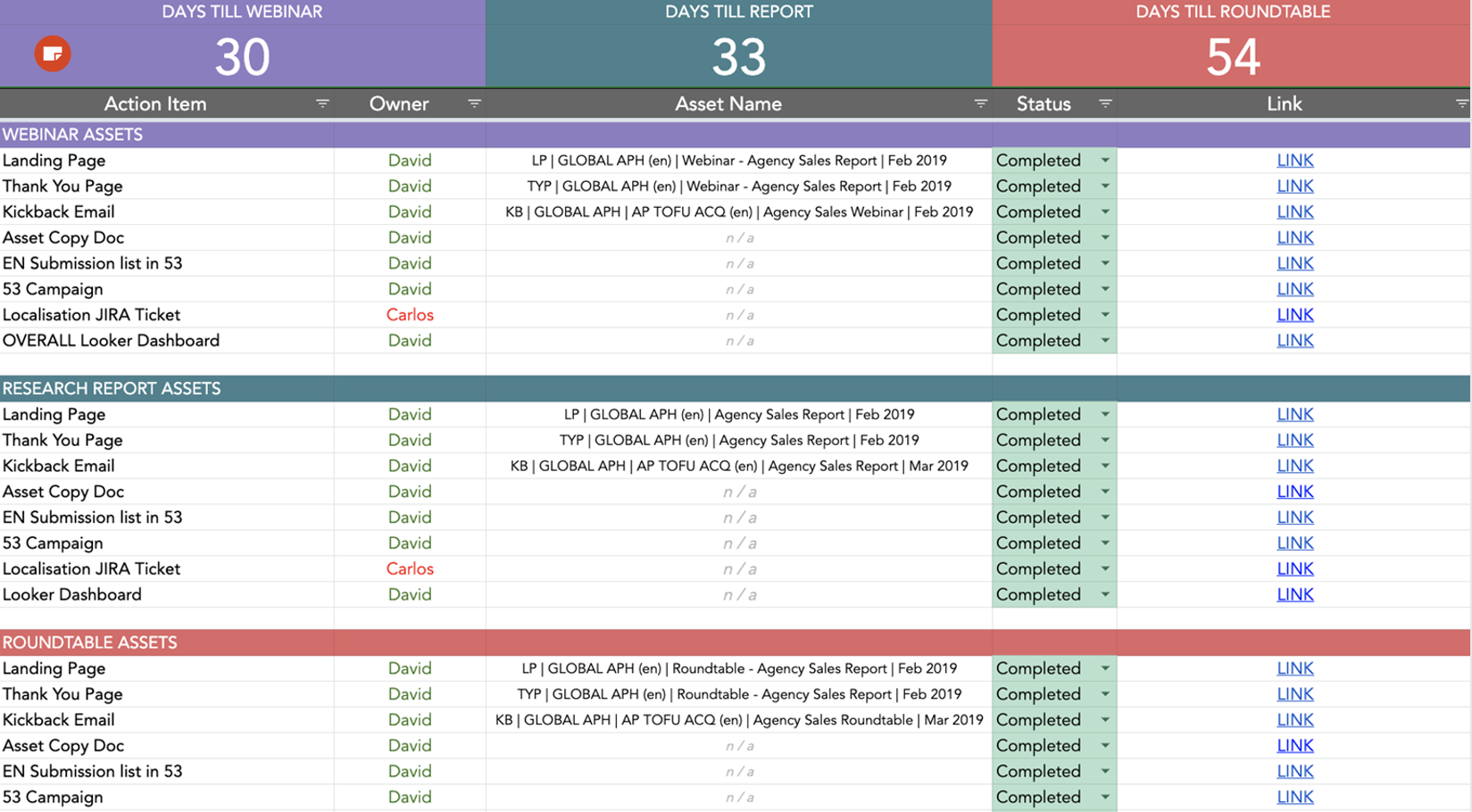 Close coordination was key in this execution process. The graphics and language of emails, landing pages, the report, and the webinar slides would all have to match to create a cohesive feeling. As a result, the timeline was built to start with the core assets, then feathering out to some of the minor materials all derived from those core assets.

The plan is theory. During the execution stage, that theory turns into practice as the entire team gets to work on actually building the campaign.

Any campaign will enter this stage, during which three distinct activities have to occur:

This is likely the most time-intensive stage of the entire campaign. HubSpot's agency partner campaign took four full months just for the building of the assets before the launch. Should some of the asset build go into the launch itself (such as the build of a promotional email after the report has already occurred), that timeline might extend even further.

This is a collaborative effort. Writing, design, and project managers all have to be on the same page to create that consistent experience mentioned above. For HubSpot, this was also the time to plan the presenters for both the webinar and round table, ensuring all logistics were cleared and ready to go before the actual campaign launch.

Stage 4: Launching the Campaign With a Clear Plan in Mind

It's not as simple as hitting a button. Most inbound marketing campaigns purposefully start slowly, with some initial A/B testing designed to determine the ideal text for emails and other promotional materials. That way, by the time of full launch, the messaging is finalised and in place, ready to start bringing in those all-important leads.

Campaign launch also requires a level of internal readiness that's important to keep in mind. Sales teams, who will receive the leads generated by this campaign, should be brought on board to understand messaging and purpose. All that needs to be in place by the send of the first promotional email.

In the case study discussed here, the launch began with a limited number of promotional emails, thoroughly tested to maximise results.

With refined messaging, a full launch of the campaign included a full promotional rollout via email, Twitter, Facebook, LinkedIn, and Slack. Where possible, Murray and his team pre-scheduled messages to go out at the right spacing and timing for the agency audience. At this point, given the extensive planning that had occurred in the previous stages as well as during the audience research phase, the launch plan was straightforward and did not introduce any additional complications.

Let's get to the measurement phase. Every marketing expert will talk about the importance of measuring results, but it's not always easy to transition that theoretical best practice into reality. And, finding and focusing on the right metrics is the single best way to determine whether or not your efforts are actually working, and what you can improve to drive new business. 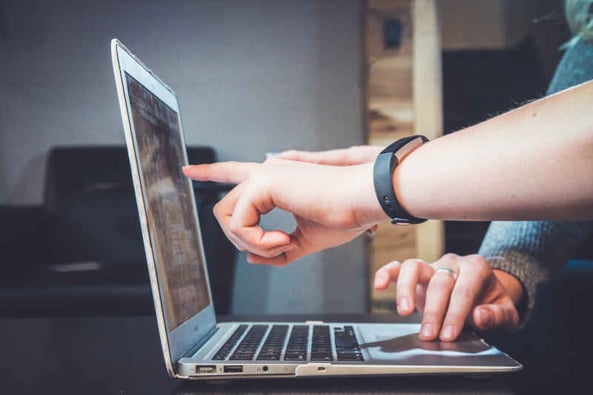 What metrics matter most depends on the goal of your campaign:

In its campaign, HubSpot focused on total views of landing pages for its three core assets, total submissions of sign-up forms for these assets, and the number of new contacts (leads) created through these submissions. Other, supporting metrics designed to lead to these end conversions included email opens, social reach, email and social clicks, and leads generated through each of these channels.

Actionable takeaways from these metrics enabled the team in charge of this campaign to make adjustments on its promotional efforts on the fly. A low-converting landing page might deserve a minor makeover, particularly when compared to other landing pages targeted towards similar audiences. Murray specifically looked at conversion rates from views to sign-up form submissions to gather insights on the success of the landing pages as well as the various tactics leading the audience towards these landing pages.

In any marketing initiative, the end is the beginning. Done right, marketing campaigns are an almost endless circle even when they have a defined end. Once a campaign is finished, the learnings gained from it should inform everything else your company does in the future.

Recall that in the pre-campaign stage discussed at the beginning of this case study, a significant portion of your persona definition will depend on their past interactions with your content and campaigns. This is where that factor comes back into play. The more you learn from the way you execute your campaign, the more you can improve future efforts to better reach, convince, and convert that audience.

In evaluating the overall success of the campaign, Murray highlighted two core learnings that could be applied to any future marketing strategy:

Because the HubSpot campaign consisted of these three assets, Murray was actually able to not just assess the campaign's overall success but also compare the webinar, report, and round table to each other. That created another learning opportunity for HubSpot to consider as it builds future campaigns targeted towards the same audience.

Yes, inbound marketing can be complex. From lead magnets to months-long SEO, it's difficult to sift through hundreds of pages of best practices that may not even be applicable to your industry. That's why a case study like this, walking through each of the campaign stages any successful marketing campaign has to follow, becomes so beneficial.

Through its efforts, within less than a year, HubSpot was able to generate not just 900+ new qualified leads for potential agency partners, but also generated valuable content for its existing partners. The value created, combined with the comprehensive plan to promote that value and leverage it into tangible marketing results, perfectly showcases the potential of inbound marketing. Follow these stages, and your campaign may just experience similar success in the future.